“Big ideas deserve and require big discussion…Let’s have the grit to NOT swallow a great-sounding idea without beating it up a bit, and let’s be thankful that we have the slack in our lives to be thoughtful educators.” – Grant Lichtman

The call for fostering children who are resilient and approach real-world challenges in their learning and in their lives with “grit” has been charging through the worlds of educational leadership, parenting, and child development. Read Does ‘Grit’ Need Deeper Discussion? by author Grant Lichtman, as well as the valuable resources linked within his post, for some additional thought-provoking fodder on the topic. His reflections remind us to pursue reflection, innovation, and reform – but not without doing the hard and important work of examining closely and inquisitively multiple perspectives.

Listen to Kelly McGonigal (a health psychologist) share research studies that are changing the way scientists think about stress, it’s impact on the body, and how our mindset about stress in our lives makes a profound physiological and pyschological difference.

“The harmful effects of stress on your health are not inevitable. How you think and how you act transform your experience of stress. When you choose to view your stress response as helpful, you create the biology of courage. When you choose to connect with others under stress, you can create resilience…Stress gives us access to our hearts, the compassionate heart that finds joy and meaning in connecting with others and yes, your pounding physical heart working so hard to give you strength and energy. When you choose to view stress in this way you’re not just getting better at stress, you’re actually making a pretty profound statement. You’re saying you can trust yourself to handle life’s challenges and you’re remembering you don’t have to face them alone.” – Kelly McGonigal

Ernest Shackleton and his crew of 27 set sail aboard the sturdy ship christened Endurance in December of 1914. Over the course of their two year expedition they truly lived everything embodied in the word “endurance”. Forced to abandon their ship, they spent months traveling hundreds of miles over frozen land and hellish seas, withstanding an astonishing amount of physical and mental hardship. Most astounding is that, in spite of all they endured, not a single member of the crew perished. Though they did not achieve the expedition’s goal of crossing Antarctica on foot, they achieved something that has gone down in history as a captivating tale of leadership, teamwork, and tenacious endurance. Shackleton’s initial transparency and consequent leadership attracted a group of like-minded individuals who he transformed as a result of presence, acknowledgement, and play into a true team able to endure and conquer challenges for the sake of their shared mission. In 21st century schools such leadership can grow communities that thrive in a constantly changing world as we strive to deliver our mission to each child. 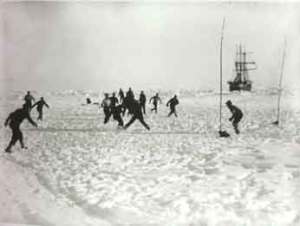 Even in light of the grim forecast for the expedition’s hardships, Shackleton understood the importance of play and the value of morale. This photo shows members of Shackleton’s crew playing football. Their ship, slowly being crushed by the Antarctic ice, sits in the background. With cold temperatures, dwindling food supplies, winter nearing, the hours of darkness increasing everyday, and no end in sight it is marvelous that there was space to play. We live fast-paced, high-stimulus lives. As educators our attention is pulled a thousand ways at once, and yet we also strive to keep it focused on the one thing that really matters in our profession: children. It is so easy to get bogged down in the to-do lists of job and life, in the hard work of working hard…that we forget that play has a very important place in drawing us together, in lightening the heavy load, and in adjusting our perspective. Shackleton’s crew played cards, hockey, produced shows, performed music, sang, and shared company. As a result, Shackleton’s crew enjoyed camaraderie in the face of all manner of physical and mental trials. We must, as educators in the 21st century, strive to keep sacred our time to play together and on our own.

Shackleton was, from the start, disarmingly transparent about the work that would be required if the expedition was to succeed. He demolished traditional power structures of the time by requiring all members of his crew, including himself, to conduct their fair share of chores and duties. Shackleton never put himself in a position where himself or his role could be construed as more worthwhile to the expedition than any other’s. After they were forced to abandon their ship Shackleton threw his name in the lot for the few sealskin sleeping bags that were available, as there were too few for everyone to have one. His job was leader, and that did not automatically entitle him to creature comforts at the expense of his crew. Shackleton believed in the power of presence, of participation in the daily life of the crew. Their work was not beneath him, it was essential to the common goal they all shared: the success of the expedition. Too often school leaders manage and direct from above and outside, and too quickly lose touch with details of the important work that happens with children on a daily basis in classrooms and hallways, at recess and lunch, and in partnership with families. These places and moments where children are is why schools exist, and a leader’s participation in them furthers the success of the common goal we all share: the growth of children into healthy and happy adults. In order to lead, you must be intimately and dependably present.

Shackleton knew the power of acknowledging people for who they are and what they bring to the table. He received over 5,000 applications for his expedition. Shackleton passed up far more qualified individuals for those who he believed had the character, skill set, and certain “je ne sais quois” he was looking for. Records report him selecting people who could sing, play the banjo, or answer his sometimes unusual questions in a manner that pleased him. Shackleton understood that to see these other corners of people, to recognize them and name them as valuable and worthy, would strengthen his crew. His team was comprised not of skills but of whole people whose whole selves (including their less typically “seaworthy” talents) were known, acknowledged, and celebrated. As educators we know from working with children that to truly see them, to invest in recognizing their presence and accomplishments in meaningful and authentic ways, creates a powerful connection and a willingness to take risks. When an authority figure (whether teacher, administrator, or expedition leader) acknowledges you in this way, you know you are safe to be, safe to try, and safe to fail. You can truly throw yourself on board with the mission (of school or expedition), because you know that you will not be dismissed, devalued, or ignored. The effort to learn about and acknowledge the gifts of ourselves and each other knits communities of all types together. 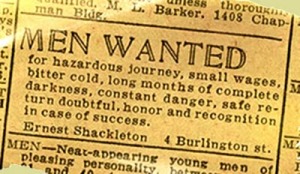 Ernest Shackleton wrote the above text for an advertisement placed for his 1914 expedition to cross Antarctica via the South Pole on foot. Shackleton had clarity of mission and transparency in his communication because he was certain about what motivated him – as man and as leader. As a result, his advertisement for an uncomfortable, life-threatening, and arduous journey attracted people to his team who signed on neither for themselves (for they were promised nothing but discomfort and loss) nor for Shackleton (for they did not yet know him). They responded because they operated from the same core reasons for living – even, if not especially, in the face of formidable challenge. Much has been written on Ernest Shackleton and the lessons his 1914 voyage of the Endurance provides about leadership. As an educational leader in the 21st century, Shackleton’s clarity of mission and three qualities of his leadership have rooted themselves in me professionally and personally. They are presence, acknowledgement, and play.  The power and importance of them transcend time and space: they are enduringly relevant and necessary for leaders, faculty, families, and most important of all, the children we serve.